Rapidly Multiplying Pigeons & How to Keep Up With Their Habits

There’s a lot of debate about pigeons and Phoenix pigeon control. Many people see pigeons as an attractive and even entertaining addition to the city landscape, while others see concerns about overpopulation and health risks. Pigeons have been raised for centuries for bearing messages and for religious purposes. Historically, the role of the pigeon was mostly positive; however, the increased urbanization of the modern world has left some concerns about their numbers, which are increasing exponentially.

Pigeons have only a few natural predators, which include hawks, falcons, and owls. While these predators do an effective job at controlling pigeon numbers in the wild, they are much less effective in urban areas. This is because food processing plants, food waste, the wide availability of garbage cans, and pedestrians who feed the pigeons enable large flocks to gather in areas where predators do not thrive. In cities, there are more than enough resources to support multiplying numbers of pigeons. Unfortunately, these controversial birds can and do breed at an alarming rate, creating a need for Phoenix pigeon removal. 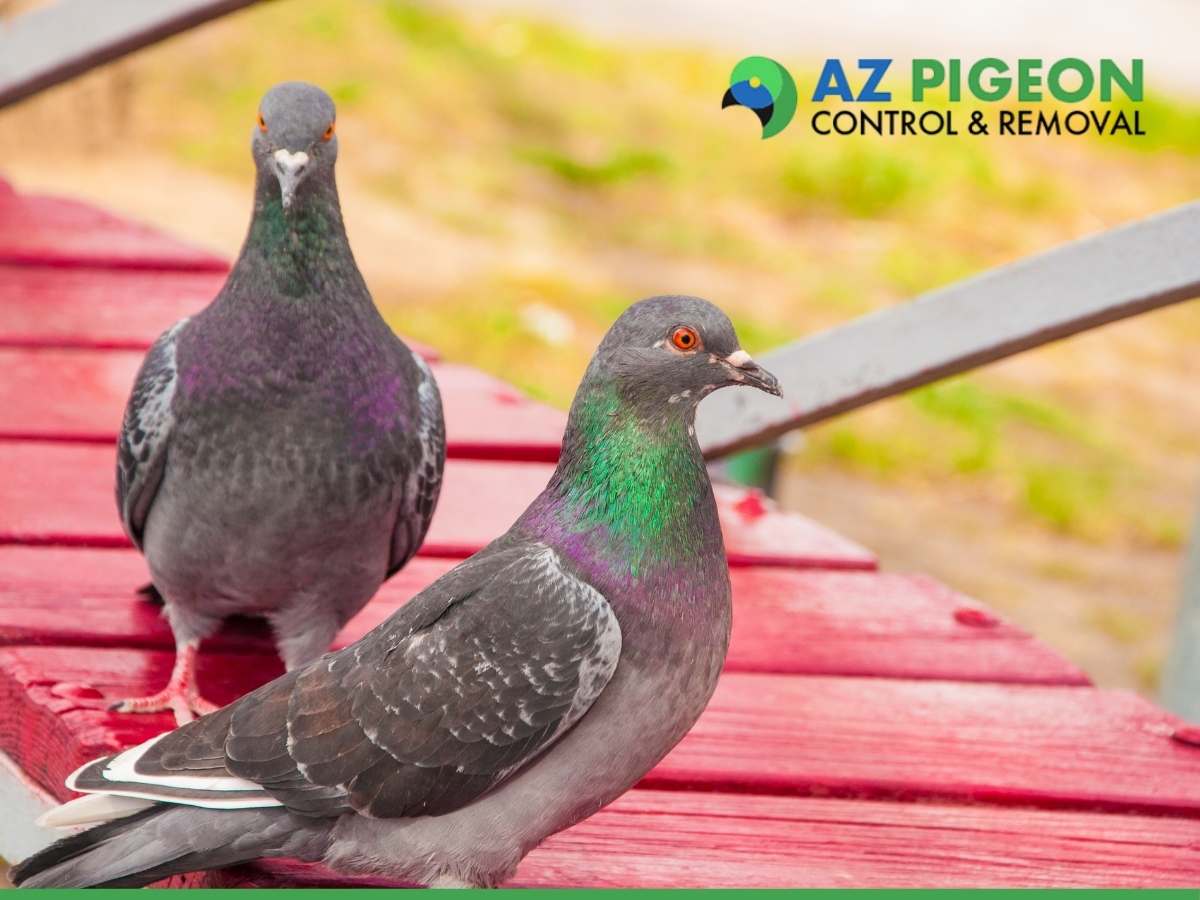 It can be difficult to grasp just how quickly pigeon numbers can spiral out of control from even one nesting pair if Phoenix pigeon control is not involved. While one or two pairs of pigeons in a backyard may not seem especially concerning, they can quickly become a significant problem around businesses or factories where waste can sustain large flocks.

Usually, pigeons live in flocks of at least 20. They live as monogamous pairs and will raise up to six broods per year, each containing about two eggs. This totals 12 new pigeons per adult pair, per year. Within six months, the new pigeons will have matured and begun breeding. If even just eight of those new pigeons have 3 broods by the end of that year, there will be at least 30 new pigeons, plus the original 12 who hatched at the beginning of the year. And that is a pretty conservative estimate. This means that two pigeons turned into 45, or more, by the end of just one year. By the end of the second year, there will be over 1000 pigeons – just from the one set of original parents. It’s easy to see why Phoenix pigeon removal specialists are in demand!

Unfortunately, pigeons (especially their droppings) are associated with significant health concerns. When dried, pigeon droppings are often sucked into heating and cooling systems and dispersed. It’s imperative that this is addressed, especially when food service is involved. Phoenix pigeon control can employ a variety of methods that include prevention and removal.

Phoenix pigeon removal companies utilize a variety of methods. Pigeon proofing is one of the best ways to discourage nesting and reduce the population indirectly. To utilize this method, bird control spikes, which are also called anti-roosting spikes or pigeon spikes, are installed along roof lines, balcony railings, and other areas where pigeons frequently roost. Pigeon spikes are almost invisible to a home’s aesthetics, but completely prevent pigeons from roosting, encouraging them to move on to another area. It’s an ethical, low maintenance, once and done approach that is very successful. Other Phoenix pigeon prevention methods include sealing up cracks, gaps, and areas on the exterior of your home or commercial building where pigeons can nest. Sometimes netting is installed to keep pigeons out.

Another successful and ethical method of Phoenix pigeon control is trapping and relocation. This involves a Phoenix pigeon removal company installing live traps in areas where the birds are roosting, and then transporting the unharmed birds to a new area.

Making your home or business inhospitable is another strategy used by Phoenix pigeon removal companies. This includes eliminating sources of food and water that may be used to sustain flocks of pigeons. Without these easy sources of sustenance, pigeons naturally move to another place with better resources.

If you want to avoid poison and utilize ethical methods of pigeon control, hiring a Phoenix pigeon removal specialist is your best bet. You’ll be glad to know that their methods are safe and effective. Without pigeons in your yard, you’ll have space for the species you actually want, such as songbirds and butterflies. When you choose humane methods of pigeon control with a Phoenix pigeon prevention company, you can feel confident you are making the best decision for your home, your family, and the management of a rapidly multiplying bird species.

AZ Pigeon Control & Removal is a local company specializing in humane and effective methods of pigeon control in Phoenix. We provide a wide variety of eradication and prevention methods so you can rest easy knowing that your home will be kept protected from annoying, messy, and loud pigeon infestations. Contact AZ Pigeon Control & Removal today at (480) 694-4007 to schedule your consultation and be on your way to a quiet, clean yard!